With the climate of healthcare constantly changing in this country, it’s no wonder that this industry’s need for data storage is on the rise.

Reflect on the last 10 to 15 years, and you'll realize the significant impact of new rules, regulations, and documentation requirements fueled by 2010’s Patient Protection and Affordable Care Act (better known as Obamacare) and 2004’s enactment of the Health Insurance Portability and Accountability Act (referred to as HIPAA). Add to this the aging baby boomer generation with their anticipated increase in healthcare needs and the ever-growing desire for greater mobility in healthcare, and you’ve got a steady demand for data center expansion.

Mitsubishi Electric holds a strong presence in the hospitals and healthcare market. One of our customers operating in this arena leases space in a colocation data center but selects and procures all the equipment residing in both white space and gray space themselves.

The data center is configured in a redundant 2N operation with two separate power feeds. They take the responsibility of keeping their clients’ records safe and secure seriously and demand nothing less than “five nines” performance - in other words, 99.999% equipment reliability.

In fact, they rank reliability and efficiency as their top two criteria for selection of a UPS. As their two existing 500 kVA UPS were reaching replacement age, the team in charge of infrastructure began exploring available upgrades. I was pleased to learn that they made the decision to change their systems over to Mitsubishi Electric and increase the capacity of two of their UPS by 50%, going from 500 kVA to 750 kVA for each.

When asked how they decided to change brands and go with Mitsubishi Electric, I was informed that the Mitsubishi Electric name came up quickly in the selection process as it was already a respected brand throughout their organization.

It seems a while back that they had selected smaller Mitsubishi Electric 1100 Series systems (10 to 80 kVA) for network closets in regional offices; they remain happy with the systems' performance and soon amassed between 30 and 40 in various locations. “We’ve been quite pleased with them,” I was told.

Brand trust was cited as a significant factor in the decision to replace a competitor’s units with two 750 kVA SUMMIT Series® UPS from Mitsubishi Electric, explaining that they felt comfortable and confident to make Mitsubishi Electric their brand of preference.

Additionally, some third parties and colleagues reinforced their decision when it was stated that "Mitsubishi is the best product out there."

Both units were installed in February 2018, and they have performed well thus far.

The hallmark of the SUMMIT Series® UPS is its revolutionary use of silicon carbide (SiC) in its semiconductors and the resulting benefits of higher efficiency, lower energy usage, and reduced operating costs.

I was curious to see if they had realized energy savings to date. My contact there replied that they had, but quickly added that they are operating well under full load capacity and that he was aware that their efficiencies would increase under higher load levels. 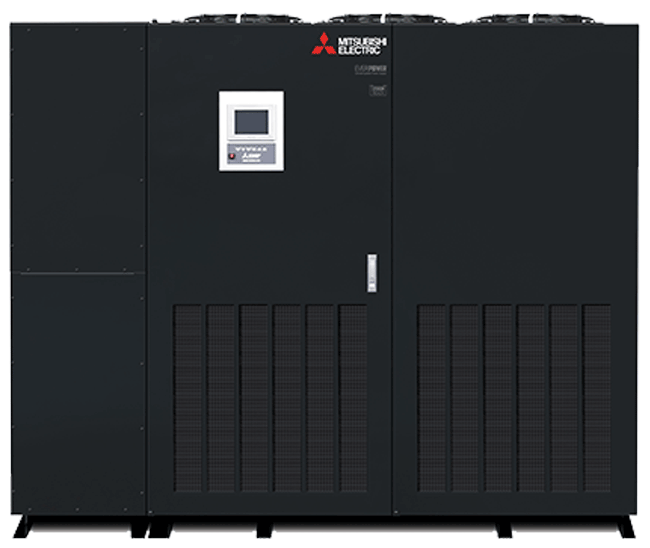 He also noted that they did observe that the systems possessed a smaller footprint than their predecessors but stated that this was not a deciding factor – it was all about the efficiency and reliability.

He then informed me they recently been acquired by a larger company and were in the process of going through a data center rationalization exercise. This being the case, he remarked that it was good foresight to get the larger units as he expects load levels to increase as a result.

He closed the conversation by sharing with me that he had recently provided a tour of their facility to a data center consulting group. I sensed a bit of pride in his voice when he said that someone in the group commented, “Wow! You have Mitsubishi!”

Truth be told, I got a small lump in my throat as well as I hung up the phone. As Martha Stewart would say, feeling proud about your employer is “a good thing.”

Whether you need a UPS to back up your data center, network closet or medical equipment, Mitsubishi Electric UPS deliver reliability and efficiency to hospitals and healthcare facilities across North America.