The replacement of a pair of aging 1000 kVA UPS needed to be completed without compromising backup power protection for all of the Grupo Salinas businesses supported through the data center.

If the load were to be unsupported at any time during the transition, the UPS provider would face huge penalties and potential lawsuits. Given these circumstances, three other UPS suppliers were unwilling to agree to this condition. 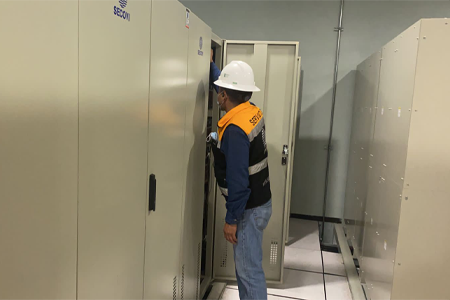 A factory witness test of the 9900C legitimized the ambitious proposal and verified that the systems were fully capable of performing admirably at the high altitude of Mexico City. 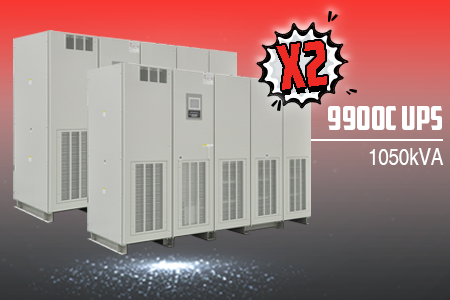 The successful tandem replacement was executed flawlessly: a complete transfer of power with uninterrupted protection of the load, all completed with limited maneuverability for all four UPS given limited physical space. 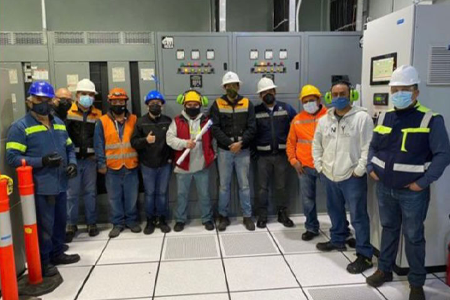 Grupo Salinas’ prominence in Mexico’s commerce is such that when it became necessary to replace a pair of aging 1000 kVA uninterruptible power supplies in the data center in Mexico City that supported many of their businesses, Grupo Salinas insisted that the work needed to be completed without compromising back-up power protection for all of the businesses supported through the data center.

If the load were to be unsupported at any time during the transition, the UPS provider would face huge penalties and potential lawsuits. Three UPS suppliers were approached initially, but after many time-consuming communications back and forth, all three suppliers remained unwilling to agree to this condition. Power supply in Mexico is electrically more complex than in the USA with grounding, transients, and harmonic issues and frequently requires additional equipment to affect corrections.

The International Power Association (IPA), who has been involved in Mexico for more than 30 years and a recognized expert on power quality, was consulted. Previously, the IPA teamed up with Secovi, an engineering design firm in Mexico dedicated to electrical protection technologies, to recommend Mitsubishi UPS for installation on mountain tops to protect transmitters throughout Mexico.

Secovi was fully aware that a UPS is typically de-rated and needs to be re-sized when installed at high elevations, but was undeterred and confidently recommended the Mitsubishi Electric brand because of their widely-recognized robust design.

Secovi proposed a carefully-orchestrated, multi-step solution for a full transition to a 2 x Mitsubishi Electric 9900C 1050 kVA UPS without any interruption to load protection. With full acknowledgment of the complexity involved, the proposed plan included installing new breakers and using redundant generators to maintain power to the load while the utility wiring work was completed.

A factory witness test of the 9900Cs, complete with load transfer conducted at Mitsubishi Electric’s Warrendale, PA facility, legitimized the ambitious proposal and also verified that the 9900Cs were fully capable of performing admirably at the high altitude of Mexico City.

In June 2021, the players and equipment assembled on site of the subject data center. As if the daring plan was not challenging enough, additional factors compounded the intricacies of the procedure; the limited physical space available for the interchange made matters more complicated, as there was very little room for maneuverability with all four UPS in close proximity of each other during the transfer.

Additionally, the palpable tension in the air was heightened by the presence of legal teams from both Grupo Salinas and Secovi. At the end of the installation, all present were breathing normally again, as the successful tandem replacement was accomplished flawlessly: a complete transfer of power with uninterrupted protection of the load.

Grupo Salinas was very grateful for the innovative solution, as well as the leadership and expertise demonstrated by the Secovi's installation team led by Hector Lozano and Edi Amaya. The implementation of the 2 Mitsubishi Electric 1050 kVA UPS has been the most important project for the Grupo Salinas Computer Center in the last 20 years due to its high technical complexity and the extreme planning required for its execution.

Without a doubt, the project was successful due to the union of three elements: (1) technology and quality of Mitsubishi Electric equipment; (2) technical capacity and monitoring of the internal team at the Grupo Salinas Computing Center; and (3) technical capacity, commitment, and exceptional execution of Secovi.

It was an exciting project with unique challenges due to the pandemic, but thanks to the cohesive technical teams of Secovi and the Computer Center working together, a perfect implementation was achieved without any failure throughout the transfer process.

Grupo Salinas is a large corporation in Mexico comprised of many smaller entities with its foundation dating back to 1906. Their holding companies are involved in many diverse markets, including banking, retail, multi-media, telecommunications, and energy. Combined, they employ in excess of 100,000 people, and focus on creating shared prosperity in the areas of economy and the environment for their many varied consumers. They serve customers in portions of North, South, and Central America.