Dallara's driver simulator in Indianapolis is one of only three in the world, making constant uptime, smooth operation, and protection against power transients non-negotiable requirements.

Given the capital behind the simulator, Dallara needs to protect their investment with a UPS to deliver backup power in the event of a power failure. 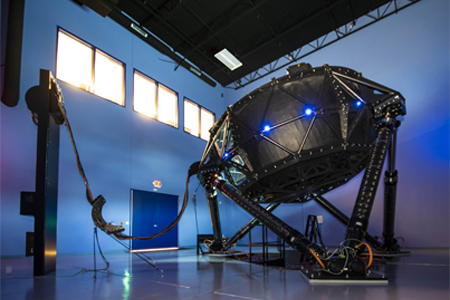 Sobek Enterprises recommended the Mitsubishi Electric brand to Dallara because of its stellar reputation in the mission critical market. 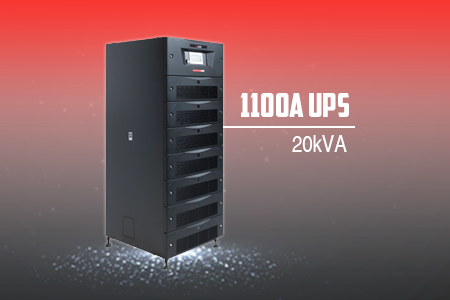 The 1100A 20kVA UPS has been successfully protecting the operation of this valuable equipment flawlessly ever since, without failure. 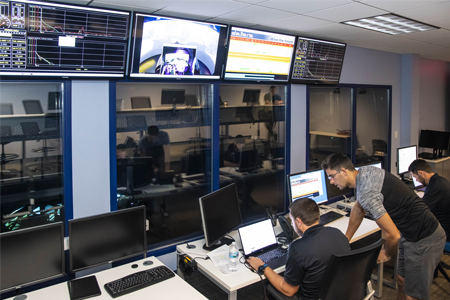 Dallara USA excels in providing the ultimate simulation experience to professional racecar drivers in their facility located just outside of the Indianapolis Motor Speedway. The state-of-the-art driver simulator is mounted in a cage atop six actuating arms powered by hydraulic cylinders moving independently, compressing and expanding to simulate the road surface of one of 100 racetracks worldwide.

A highly detailed projection system further enhances its realism. The simulator includes a communication component to allow race teams to rehearse interactions between the driver and his chief engineers in different situations. One of the main uses of the simulator, which is only available to select racecar drivers, is driver development: the driver learns about the behavior of the car and how to react in different situations.

It enables the driver to become familiar with tracks that he may have never experienced first-hand. And it simulates limitless scenarios that may not be possible in the real world, such as weather conditions. During the entire session, the simulator is collecting volumes of data that the driver and his team will examine to determine any adjustments that may be needed in suspension, vehicle contours, driver handling, etc.

As Dallara has earned the right to serve as the sole chassis supplier for IndyCar since 2012, driver time in their simulator is invaluable and always in demand.

Race teams pay substantial sums of money for the simulator experience which can really pay off at the racetrack, and expect the machine to perform as expected and without a hitch.

The guarantee of clean uninterrupted power being delivered to the simulator is absolutely essential for the capture of vital test data to make or break future performance at the race track. 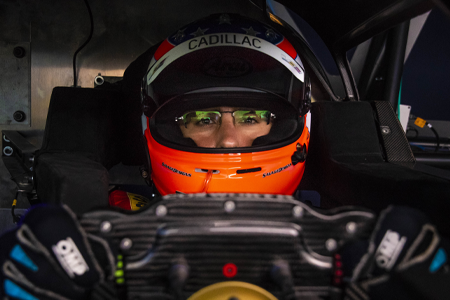 Dallara realized that the addition of an uninterruptible power supply would protect their valuable asset. They wanted a double-conversion UPS to ensure that any sags or inconsistencies in the utility power signal would not reach the simulator and made the decision to purchase a UPS dedicated solely for the protection of the simulator alone.

After connecting and discussing their needs with Sobek Enterprises, they elected to purchase an 1100A 20kVA UPS from Mitsubishi Electric, which is designed to deliver continuous and clean electrical power to a critical load. In the event of an input power failure, the Mitsubishi Electric UPS will supply power to the critical load for the specified battery time.

If the input power is not restored promptly, backup power from the Mitsubishi Electric UPS battery permits the orderly shutdown of the equipment supported by it, which in this case is the driver simulator.

The story of Dallara cannot be told without first introducing the man behind the name. Although Ing. Giampaolo Dallara may not be a household name to the average American, to those involved in just about any racecar circuit, he is an engineering mastermind. Ing. Dallara has amassed an extraordinary career for well over 50 years perfecting the art of marrying passion and profession.

His story begins in Italy, where he earned a degree in Aeronautics. He established himself early in his career working for an impressive string of elite European car manufacturers beginning with Ferrari. Motivated by a strong desire to get closer to the racetrack, he was named one of Maserati’s race engineers at the young age of 25 working directly with the racecar drivers. From there, he moved on to Lamborghini, where he served as Technical Director with the assignment of creating the world’s fastest sports car. He then went to De Tomaso, where he built and designed a Formula 1 car for Frank William’s legendary team in 1970.

Two years later, Ing. Dallara decided to embark on his own, founding Dallara Automobili in his hometown of Varano De’ Melegari, near Parma, Italy. Using his background in aerodynamics and vehicle dynamics, Giampaolo Dallara built a series of progressively advanced wind tunnels equipped with rolling belts to test racecars in motion. The aerodynamic studies that followed resulted in the development of a superior Formula 3 racecar that won international races repeatedly. The era of Dallara racing dominance had begun.

Ing. Dallara next ventured into racing analytics by developing a high precision driving simulator to provide a means for the driver and the booth engineer to work together to optimize the performance of the vehicle based on performance data observed during the session. In 1997, Dallara ventured into the INDYCAR Series. The following year, a racecar featuring a Dallara chassis took the victory lap at the Indy 500. Proof of Dallara’s superiority in the racing field lies in the fact that they were named the sole chassis supplier of the INDYCAR in 2012 and still retain that title.

To support this important role, Dallara USA was built just outside of the Indianapolis Motor Speedway the same year, housing a machine shop that builds the chassis for INDYCAR, and a very impressive driver simulator. Drivers that have been fortunate enough to occupy the cockpit of this technological marvel are amazed at the extreme realism, noting that one can feel every bump on the track, the extreme G forces of the turns, and even the grip of the tires.